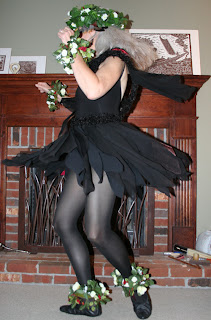 Friends have asked about Keikimanu, the costume I wore at Halloween this year. Keikimanu, whose name means “little bird” or “baby bird” in Hawaiian, is an imaginal figure who appeared to me back 2000, toward the end of my first quarter at Pacifica. Part of the final exam for Robert Romanyshyn’s “Intro-duction to Depth Psychological Research” was to give a presentation that expressed in some way our understanding of the material we had covered.

My topic was clear. My mother had died from complications of Alzheimer’s disease in December of 1999. I wanted to talk about our culture’s ways of dealing with illness, dementia, and death, and I wanted to do so from an imaginal perspective. Pacifica had opened up the imaginal world to me once more, and given me a framework and tools to explore psychological issues through artwork, dreamwork, and other non-rational modes of experiencing which my 20-year career in the “hard” sciences had not allowed me to express.

As I began to think about what I wanted to say, it was clear that the topic was still very “hot” for me—my emotions were close to the surface and threatened to turn any presentation into a flood of tears. Yet the experience of watching my mother marginalized, institutionalized, and medicated into oblivion demanded to be spoken and explored.

One day as I sat pondering this dilemma, I heard the word “keikimanu.” Not knowing what it meant, but recognizing that it as Hawaiian, I looked it up and discovered the meaning. Over the next few days images began to appear in connection with this word, which I now recognized as a name, and finally I went down to my studio to see what would emerge when I began to try to give form to this being who seemed to be visiting. Keikimanu’s mask was the result.

Masks are wonderful things—they allow us to become something or someone different from our ordinary selves. When I put it on, it terrified Wendy the dog, who would not stop barking and snarling; she had to be shut up in another room. I felt different—more powerful, less vulnerable. But more than that, as soon as the mask was completed, the presentation fell into place: a three-act “play” in which I told the story of my mother’s illness and death from the perspectives of my mother, her doctor, and myself. In between acts, Keikimanu provided narrative and interpretation of the larger psychological and archetypal perspective. Keikimanu also introduced and closed the play with a Hawaiian chant honoring the ancestors. Anyone who knows me today will recognize how out of character that would be even now, and seven years ago I was far more shy and introverted. But Keikimanu gave me courage and the ability to watch and witness rather than simply experiencing the emotions.

Keikimanu also took part in my final presentation at Pacifica in 2003—it seemed fitting that he/she help me express what those three years of intense learning had meant to me. Again, he/she chanted in honor of the grandmothers and grandfathers, offering thanks to those who had been present with my classmates and me during that time. And since then, the mask has been hanging in the foyer here at home, reminding me of the imaginal friends and guides who accompany me on my journey.

So this year, when I started thinking about Halloween, Keikimanu volunteered to be my “costume.” It was great fun putting the rest of him/her into physical form. Now, if I could only fly!
Posted by Kay at 11:28 AM No comments: