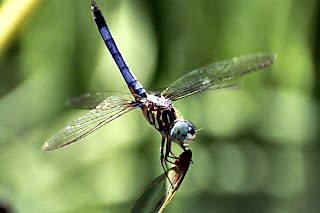 This afternoon, after posting the previous entry about “bzzzzz-yness,” I walked out to get the mail. On the way, I stopped to take a breath and look at the clouds from a thundershower that’s missing us to the north.

As I looked up, something buzzed past me—a dragonfly, which landed on the ball-topped antenna of my car just above eye level. There it stayed for the longest time—minutes!—surveying the surrounding area for prey. It saw me; I saw it tilt its head to look as I shifted position. It took off and circled a few times, always coming back to rest on the antenna tip. It even thought about landing on my outstretched finger once, but decided the antenna was a better perch.

What an amazing experience! It was no more than three or four inches away—close enough that even my nearsighted eyes could see its tiny antennae and the veins in its wings. I had time to fill myself with seeing it—that’s so rare with any wild thing, much less with something so swift and wary as a dragonfly.

The spell was broken when I sneezed. But it was magic, indeed! I’m kind of glad I didn’t have my camera (this photo is from Wikimedia commons), so that I could see it without anything in between—no lens, just my perception and my sense of wonder. Grateful to have slowed down enough to experience that. 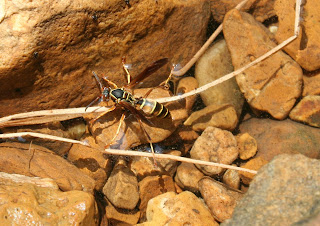 Interesting thing today: I woke once again from rapidly vanishing dreams that left the impression of frantic busyness. That’s been a theme lately—nothing that I can remember except being “in charge” of too much to do. Not a good feeling.


Yesterday afternoon, after visiting the horses at the barn, I was wiped out from the heat and took a nap for an hour or so. When I woke up, I didn’t want to get out of bed—not because I was depressed or unhappy in any way, but just because it felt so good lying there doing nothing. Same thing this morning, when I allowed myself my one day a week to sleep in. It felt so good to do nothing at all, and I didn’t want to get out of bed.

Then, on facebook, I saw an article someone shared about why, in order to “save our sanity,” we as a country and culture need to go back to the 40-hour work week. It made so much sense, and talked about things I’ve been feeling for a long time. A couple of hours later, an editorial in the New York Times came through my email—this article was about our self-inflicted too-busyness.

In between reading those two articles, I allowed myself ten minutes to watch yellowjackets drinking from the bottom of the now-defunct waterfall, where I’ve been keeping a little container filled with water. I just squatted there and watched them, enjoying the quiet and the reverie.

OK. I get the message, though it’s almost to the “we’re gonna hit you upside the head if you don’t listen” stage. My Guides often have a really hard time getting through to me. It’s time to get back to the quieter, more contemplative part of my life. It’s summer, and my appointments are limited because of the heat.

It’s so hard, though, to remember that quiet and reverie are vital to the work I do. Surrounded as we all are by a culture that values only measurable “output,” and raised as I was by a father who believed that even sitting down to read a book was inexcusable idleness, it’s especially tough. Tough—but necessary.

This has helped make sense of my late-night obsession with Spider Solitaire (and possibly my insomnia, as well): mentally exhausted, physically tired, but unable to just shut down, I often spend an hour or more playing that all-but-mindless, addicting game until I force myself to shut off the computer, take a couple of Benadryl tablets, and try to sleep.

OK. Time for some major changes. Can I do it? Dunno…. Stay tuned.