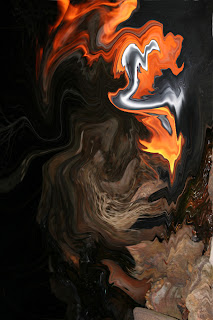 It’s so difficult to articulate just what it is that I’m after in this lifetime.


The best way I can explain it is that I want to live my life alchemically. I want the miraculous, that third thing that only emerges if and when one is willing to sit in the torment and agony of not-knowing; to just sit in that unbearable tension between things that pull hard in opposite directions, or in many directions at once.


Everyone has times like that, and most of us—including me, in the past—are provoked by the pain into choosing one or the other of the alternatives.


But what if we are willing to sit in the misery, feeling everything, being aware of everything, hiding from nothing, until something unforeseen emerges? What if we somehow have the courage to sit in that, and refuse to make a choice, until the miraculous shows up? This is how we transform ourselves, or are transformed; this is how we change ourselves and the world in ways we could never have imagined.


This path isn’t for the faint of heart, nor is it for those who lack the courage to endure agony—and I mean agony! It’s not for those who would avoid looking at the ugly things about themselves and others—like I wanted to do, and still wish I could do—because the key is to feel all of it, be aware of all of it. That’s the fire: the feeling, the awareness, the consciousness that we bring to the engagement with the world and with our choices. That’s what transforms us!


If we just sit there in misery and let "whatever" happen, thinking we’re doing our soul work, something will indeed happen—but then it’s because we chose not to make a decision, not because we consciously placed ourselves in the crucible. Does that make any sense?


Anyway. It’s interesting. I am so passionate about that—but it would be irresponsible to go out and urge everyone to try it. If there’s anything about me that’s at all special or different from most folks, it’s the fact that I am willing to endure the agony, to welcome it, as the agent of change that allows me to walk my soul’s path with open eyes.
Posted by Kay at 4:08 PM No comments: