A New View of "Reality" 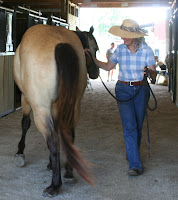 Wow. I haven’t posted anything here in six months! All that moving of “furniture” didn’t leave much energy for writing, and it’s still going on. But it’s cool and rainy today after a blistering-hot summer, and it’s past time to update the blogs.

So, what has changed during this time?

First of all, both my skill level and my confidence in my own abilities with the horses have increased dramatically. Now, when I have a horse on a lead line and she challenges me, I laugh and just keep making the request. People repeatedly tell me how “graceful” and “effortless” it looks when I’m working with a horse on the ground—and I feel it, too. The horses respond better and quicker, and after the work they relax with me, heads down, snuffling my arm or my rib cage.

I notice that I’m no longer afraid to go work with a volunteer or a potential adoptive owner when they need a little guidance. I’ve grown into my title: “Lead Intern.” I still know my limitations, but what I know and do well, I’m happy to share.

But the change is not quite that all-encompassing. This became evident yesterday, when my trainer friend “Jay” and I were discussing an volunteer award application that a fellow intern had submitted to his company. To me, it seemed to be a self-congratulatory piece of fluff, with miniscule grains of truth spun like cotton candy. I was offended; even though those grains were real, how dare he submit such a thing?

Jay had quite a different take on it. Though he recognized the fluff, Jay felt like the entire document was well written and perfectly acceptable. We argued back and forth for an hour or so, as we worked with the horses. I got upset to the point where I had to walk away for a bit. When I came back, he had me read some of the offending parts aloud, with my own inflection.

He waited patiently until I was finished, and I commented, “For his next trick, he’ll walk on water!” Jay laughed out loud and said, “But it’s all true!” I just stood there for a minute with my mouth hanging open. Then two things happened.

First, I started to cry. Fortunately, Jay knows me well enough (and our relationship is good enough) to take tears in stride and not try to fix anything. Second, I realized that the reason for the tears was the realization that in fact, it was all true, and true of me, too. It is true—and yet I would never have considered saying it, much less putting it into writing.

Parabola Magazine posted a quote on their facebook status yesterday. Here’s part of it:

When we see, the world enters us. And, contrary to what we may assume, it does not flow from eyes to brain as a stream of purely objective data. We build the gates that receive the world… (Trebbe Johnson in "Where's the Temple?: Seeing Behind the Foreground," PARABOLA, Fall, 2011).

Just the day before, I opened Greg Mogenson’s Greeting the Angels: An Imaginal View of the Mourning Process, and read this:

Living out each day as if it were the eternal recurrence of some yesterday we could not grieve, our fundamental adaptation to life gradually becomes more and more antiquated until, at least, we ourselves become outmoded (p. 9).

The premise here is that what we experience, and particularly (according to Mogenson) what we ardently desire but cannot have, or that we lose, determines—not just influences—how we perceive the world. It takes a huge effort even to make a crack in the blinders, the filter, that creates our version of reality.

Realizing this, it’s easier to understand why I initially saw my fellow intern’s material as “spun” to the point of falsehood, and perceived it as malicious or even threatening:  because I would never allow myself to toot my own horn in that way. No matter that it was true; I was unable to see it. To do so would violate my perception of reality, based on my long-ago experiences.

As a child, I developed the conviction that no matter what I did, I was never going to be good enough to satisfy my parents, much less the world at large. That filter, that gate, has been so effective that only now, in my seventh decade, can I even begin to question my conditioned version of reality. That someone else, doing largely the same things as I do every day, would interpret his own importance so differently was a huge challenge to me.

Well, there’s something to be said for a shock to the ego—and this shock was a positive one. I’m going to have to challenge my own worldview here, starting right now.