On Corsets and Hoops 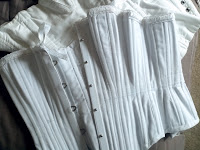 The following is a bit from my dissertation (which will account for the scholarly tone—my apologies) that I’m posting in response to the image that a friend posted on facebook this morning. The painting depicts a group of obviously wealthy men and women “enjoying” a day at the beach, ca. 1860. The women are all wearing fashionable hoop skirts. This prompted a discussion of this “beach wear,” and I promised to post these few paragraphs.

I've made and worn corsets from a number of different eras, and this piece is based on my personal experience. My re-enactor friends will find a few things to disagree with here, and I have deliberately cited difficulties that are increased at the tighter end of the "lacing scale." Nevertheless, see what you think:

Corsets and Morality in the Victorian Era


Every woman, perhaps especially those youngsters growing up now who seem to have so little idea of what “women’s liberation” is all about, should spend a day wearing the undergarments that our foremothers had to endure. The myth of the Victorian lady helpless to retrieve her dropped handkerchief is no myth. Victorian corsetry was designed to mold and contain the female form, which (like woman herself) was by cultural definition naturally weak and unable to support itself. Feminine weakness was both physical and moral; her tight lacing kept her upright, contained, and virtuous. The term “loose woman” originally referred to the woman who did not lace her corsets tightly and was therefore (again by cultural definition) morally lax as well.


Women policed each other carefully; it is the real triumph of the patriarchy that we women are complicit in our own enslavement, thereby rendering it even more difficult to see the patriarchal origins of the restrictions. As Morgan (1999) notes, the patriarchy is not a “transhistorical, monolithic spectre for women.” Rather, there is a “diverse dynamics of the reality of female subordination,” in which women “were never merely passive victims of patriarchy, but often crucial to its perpetration” (p. 93).


A corset is an odd garment to wear. Although a properly fitting corset is not painful if tight lacing is avoided, it does not allow for freedom of movement. A corset is difficult to put on without help, at least the first time before one gets the lacing adjusted, or if one is dressing to fit into a ball gown that requires, as mine does, a smaller waist than one’s day dress. Pulling the laces tight often results in a lightheaded feeling that, fortunately, quickly passes. Once in place, the corset alters one’s breathing: One’s chest expands not outwards but upwards, pushing one’s bosom toward one’s chin with every breath. A good corset does wonders for the posture, without one needing to make any effort whatsoever. One can slump within the corset without changing one’s posture outwardly. No inward strength is required. Clothing can be as elaborate and delicate around the midsection as desired, since one does not disarrange the waistline by either bending (impossible), breathing (redirected), or overeating (painful and definitely not recommended).


A corset generally does not hurt when first donned, but only as the day goes on. Pressure from any folds or creases in the undergarments begin to wear on the skin; the lower end of the ribcage begins to bruise from pressure against the steels. The underarms are sometimes rubbed raw by the pressure of the bones through their casings, especially if the corset is a tiny bit too long, or if one has begun slumping from the pain of having one’s spine held in a fixed position for hours on end. Then, just when bedtime comes and one expects sweet relief at last, one discovers the corset’s final misery: It hurts even more when one takes it off than it did when it was on. The reason for this eludes my understanding, but it is true nevertheless. For the first few minutes that the corset is off, one nearly wishes to put it back on again.


Corsets functioned to both create and maintain many of the Victorian myths about the frailty of woman (Steele, 2001). The effect of the corset on the female body is remarkable. Muscles that nature intended to support the body are not used, and the woman becomes, over time, quite literally weak and unable comfortably to hold herself upright for long periods. The displacement and deformation of the ribs and internal organs of the wearer are legendary, as are the tales (possibly apocryphal) of those who had ribs removed in order to achieve a slimmer waist. Breathing is restricted and a woman is far more likely to faint because of it. One can only with difficulty tie one’s own shoes or retrieve a dropped hankie; one becomes literally helpless. Women who had to work for a living, or those who kept their own houses because they could not afford servants, could not wear their corsets laced fashionably tight and still function; they were literally, if not morally, “looser” than their wealthier sisters.


Then there is that other fashion innovation of the mid-19th century, the cage crinoline. The crinoline, or hoop skirt as we now know it, consists of a variable number of steel bands encased in cloth. It was hailed as an invention that freed women from the close confines of numerous heavy petticoats catching about their ankles. True enough. The crinoline, which in its heyday around 1860 might be twelve feet or more in circumference at the lower edge, left plenty of space around the ankles.

Plenty of space, that is, for drafts to reach one’s private parts (the long drawers of that day were made of two separate legs connected only at the waistband), plenty of area out of sight under one’s skirt so that one could trip on almost anything, plenty of skirt volume to swing, sway, knock things over, and hinder one’s passage through doorways and up stairs. More than one woman was burned to death when her dress brushed into an open fireplace or a bonfire on the street. And, in the context of undergarments and morality, one attribute of the hoop skirt should be noted: It is difficult to reach one’s nether parts, either for hygiene or self-defense, while wearing a large hoop. How curious that a garment designed to “free” women from restrictions functioned, in fact, to decrease their mobility and increase both their sexualization and their vulnerability.


Aside from a very few gentlemen who, out of vanity and an expanding midsection, wore corsets for dress occasions (Steele, 2001), what man would for an instant put up with the constant daily restriction on function that the Victorian woman lived with? The patriarchal and paternalistic beliefs about and restrictions upon women were both fostered and supported by women’s dress. Best of all for the patriarchy, the men almost never had to say a word; women themselves did the enforcing!