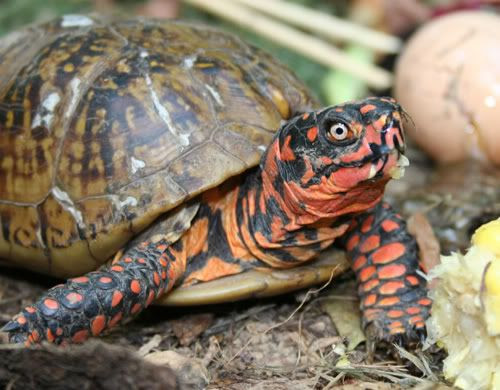 I came across this fine fellow—a male three-toed box turtle—the other day as he was enjoying an ear of corn on my compost pile. Seeing him reminded me of a fascinating afternoon I spent back in May watching a pair of turtles doing the nasty out on the hillside. Turtle love is v--e--r--y s--l--o--w i--n--d--e--e--d . . . . I have no idea what this has to do with the imaginal world, but it’s too good not to share.

I came upon the two of them unexpectedly. Rather than pulling their heads into their shells, like they normally would, they both just looked at me. The male, with his angry eyes, swiveled his head in my direction as though he were daring me to interfere. I apologized profusely, backed away, and watched the rest of the event through binoculars from the deck. As soon as I left, the female seemed to urge the male to get back to what he was doing, and it didn’t take long for him to recover his interest.

Far from just tolerating the experience, she seemed to enjoy it as much as he did. Her head arched back toward his as he reached for her, though their armor prevented a kiss. His humping was rhythmic, about every three seconds, and he extended his head, neck, and foreparts farther and farther out of his shell. Half an hour into the event, he was vertical, and I could see that he had a death grip on her bottom shell with his back feet while his head and front legs opened and stretched to the sun as if in worship. By the end, some 45 minutes after I first found them, he was still attached but literally on his back, pulsing, his head first lolling out, then rolling back into his neck like a deflating penis disappearing into its foreskin. All the while his body convulsed every three or four seconds, pulling him nearly vertical and then releasing him to sag back to the ground. Guys, you can only pray for an orgasm like that one!

By this point she was looking more than a little bored. Eventually she shifted position and tried to walk away or throw him off. She couldn’t drag him far, though, on his back as he was, and still gripping her shell, so she stopped and waited. After another ten minutes he let go one leg, then (five minutes later) the other, and lay on his back for a while longer, apparently utterly spent.

Suddenly, he snapped out of his trance. In a flash (in turtle time, that is) he righted himself with a thrust of his head and one foreleg. He blinked his red eyes twice, his head came up, and he looked at his sweetie as though seeing her for the very first time. Hello, you beauty! He turned toward her eagerly, amorously. She, who had been watching him vaguely, was having no more, thanks, and closed herself up. He, not wanting to take no for an answer, circled her twice, sniffing her and butting her front and rear, lifting her hind end completely off the ground with his shoulder. Still she refused. Enough already! After the second circuit, he took off at a clip—amazingly fast for a turtle—in search of his next conquest, one supposes. When last I looked, she was still sitting there, head out of her shell but not moving, deep in whatever post-coital thoughts female turtles have….
Posted by Kay at 6:26 PM

I once saw a pair of Gallapagos tortoises having at it, but didn't have the patience to watch for 45 minutes. I was on a date at the zoo and it was all just too much.