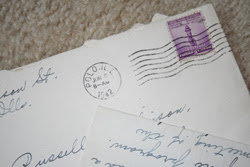 I was watching one of my favorite shows on TV last night—“John Edward Cross Country.” John Edward is a psychic and medium, and I love watching him work because the way he receives information is so close to the way I receive it myself. Of course, he’s way better at it than I am, but it’s still fun and encouraging to me.

Last night he was talking about how folks who have passed on like to use electronic items like computers, telephones, tape recorders, and the like because the energy of these devices is relatively easy for them to manipulate. That’s certainly been true for me! And those of us with a sensitivity to the Other World have to be careful around electronic devices because we tend to fry them somehow…. I once went through four tape recorders in a week, and anyone who heard me call my first and (so far) only public contra dance may remember how the microphone started acting up as soon as I touched it.

Anyway, it reminded me of the following event. The Ladies are the group of imaginal women who are helping me with my dissertation, and the rest of this entry is cut directly from the dissertation draft, so the tone is a little different, but I don’t have time to revise it for the blog. It’s pretty readable:

Although the Ladies are not living, flesh-and-blood women, there are still ethical issues to be considered in doing this work. Jung believed that we have an ethical obligation to the figures of psyche. I concur. The wishes of the Ladies have been respected to the greatest possible extent when including material from my interactions with them. Here is an example of how this has worked.

Early in the process of this dissertation, while I was still examining the box of artifacts and trying to decide how to use them, I came across a number of letters to my grandmother from a young woman who had been engaged to my father at the time he left for combat; let’s call her Bernice. I had not yet had time to read Bernice’s letters, but decided to scan them into electronic form first, along with a batch of other letters that I had been working on. The other letters scanned fine. When I put the first of Bernice’s letters on the scanner bed and pressed “start,” nothing happened. I checked the connections, repositioned everything, and pressed “start” again. Again, nothing happened. I tried everything one more time, and this time, when I pressed “start,” the entire computer shut down—completely shut down.

After a moment’s panic, I began to think about what had just happened. My father and Bernice had broken off their engagement some time while he was overseas; nothing in his letters or my grandmother’s even hinted at what happened between them. How difficult this event must have been for everyone concerned, perhaps especially for Bernice herself. Could it be, I wondered, that after all these years she preferred that her letters not be read? Would she prefer to maintain her privacy? I put the letters back into the box without reading them; they are still there, unopened by me. When I re-booted my computer, the rest of the letters in the box scanned perfectly, and I have had no trouble since.

My response to this incident seems strange when viewed from a rational, scientific viewpoint, but it is an ethical approach that honors the reality and the autonomy of the imaginal figures. I believe that we need to keep such concerns in mind as we work toward learning more about the imaginal world.
Posted by Kay at 10:24 AM