A friend asked me last night why I refuse to buy Tommy Hilfiger products (with the exception of my black bomber jacket). The explanation: I have no idea, other than the fact that my major other-worldly shopping buddy has it in for that designer for reasons unknown to me but having something to do with some Central American country. If anyone can figure that out, please let me know.

This imaginal friend of mine is a society lady, well known in fashionable circles and whose name you all might recognize, who died some years back; let’s call her Sarah. For some reason she started visiting me a year or so after she died, to my total astonishment.

My theory about why certain imaginal figures are drawn to us, or the other way around, is the same as my explanation of why relationships form in the real world: some resonance is present between the two souls, in terms of life experiences or passionate interests. It’s just the way the Universe works. Nevertheless, it does create some odd pairings, like this one: a high-society fashionista and me, who (although I clean up fairly well and actually taught dress-for-success for several years) has little interest in fashion per se.

Anyway, among the other topics Sarah and I discussed, my sartorial habits came up. At the time, I was running nearly every day, and although she regularly kept me company, Sarah thoroughly disapproved of my running gear: usually jeans and whatever t-shirt happened to be clean. Hey—-I’m running through the subdivision, for pete’s sake—what do I care what the neighbors think? As for her, well, poor thing! I mean, how perfectly dreadful to be not seen with someone inappropriately dressed! But after a couple of months I got tired of hearing the grumbling and agreed to go shop for suitable running attire.

So I get to the Galleria, and as soon as I arrive the grousing begins—-evidently the stores in this mall are not nearly upscale enough to suit my friend. I argue that my budget is not the same as hers was, and that I’m not about to shop at Saks for clothing to sweat in, thank you very much.

On the way down the crowded escalator one of those weird moments occurs where there’s sudden silence all around—-for some reason all the chatter of the people around you ceases at once. After several seconds, I hear a woman coming up the escalator say, loudly, “…and you must NEVER buy anything by Tommy Hilfiger!” Another heartbeat and the chatter resumes. OK. Message received.

Sarah and I compromise on Lord and Taylor. I grab a sweatshirt and a pair of jogging shorts that I can already tell she doesn’t care for and head for the dressing room. Picking a door at random, I open it and see that the last person in there apparently left all the clothes she tried on—-except that nothing looks like it’s been tried on. Everything is neatly on hangers, arranged just so. All are my size. All are jogging clothes. And not a Tommy Hilfiger in the bunch.

So I got my jogging outfits and Sarah was relieved. Ever since then we’ve shopped together off and on, and she finds the most incredible clothes. She no longer stocks the dressing rooms for me; it’s mostly a matter of nudging me toward the right rack in some obscure corner of the store. And she’s learned about sales, thank goodness! Designer stuff on sale works for me. Most of my favorite things are the result of these kinds of trips.

Sarah and my bad-boy alter ego Brian Kinney (whose favorite thing other than sex, booze, and drugs is expensive clothing) have recently teamed up. Last winter I was having a hard time finding a leather bomber jacket that I had wanted desperately for years and finally decided to buy. I didn’t want a girly-girl jacket but one with a harder edge to it and also some serious warmth. I can’t remember the circumstances, but I found one online, finally, at a good price. I hesitated to purchase it because the designer was—-you guessed it—-Tommy Hilfiger. But Sarah didn’t say a word and Brian just kept insisting that it was the right one. When it arrived I realized why they made an exception for this particular jacket: the sleeves are lined with red satin and there’s red trim and stitching inside. Those of you who’ve read Red will understand the significance!

Those two outdid themselves for my birthday this year, though—-a light-weight leather blazer with incredible sleeves and (it had to be) red accents inside, originally $500 and on sale for $99. Love it, love it, love it!

No more Tommy Hilfiger, though. 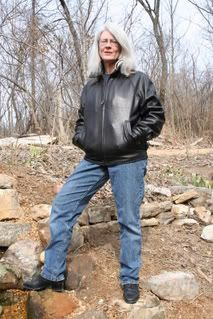